Trigger warning: this post talks about mental health including suicide, abuse and violence.

My name is Julia and I care for my daughter Hatty, who is 33. I knew by the time that Hatty was 8 that there was something wrong and this is a little bit about some of the challenges that we have faced in the 25 years that I have been a carer.

When Hatty was 8, she started showing signs of distress and I sought advice from our Health Visitor. Appointments with a Child Psychologist and a Child Psychiatrist followed; both were kind, but neither felt that they had sufficient experience to help Hatty. When she was 13, her care was taken over by a specialist Community Adolescent Mental Health Team in Poole. I had no idea then that when they received a written report on Hatty they made a lightning diagnosis: her behaviour was a bit odd, they thought she’d been abused and accused me of doing so. They spent the next 5 years doing everything they could to prove that they were right, causing Hatty, my son and me, enormous pain and distress in the process.

They insisted that Hatty was admitted to an Adolescent Unit on the other side of Taunton for 8 weeks of assessment. From there, she was to be sent to a foster placement because, the belief was that as soon as she was away from me, she would start to develop normally. I was terrified that I would lose Hatty for good, but she was very aggressive and violent at times and I was equally terrified that if I insisted on keeping her at home, then my son would be moved into foster care for his own protection. Hatty was adamant that if anyone was moved away it should be her, because, she said, her brother had done nothing to deserve being taken away. Nor had Hatty.

We know now that Hatty was in the early stages of developing very severe treatment resistant psychosis, which manifests itself as paranoid schizophrenia. In one of her early psychotic episodes, I took her for an appointment with the psychiatrist. His manner was cold and disdainful. He asked Hatty what was the matter. ‘The voices’, she started, and he rounded on her. He raised his hands and said harshly ‘Do not tell me about the voices. I do not want to hear about them’.

Hatty’s first foster placement broke down after several weeks and Hatty was allowed home. My son and I were thrilled, but I needed to be able to keep us all safe. I explained to Hatty that if she became violent again, I would ask my son to call the police. As well as ensuring our safety, this would mean that there would be independent observers of any future incidents. He rang from my bedroom, and if I kept Hatty downstairs, I could at least protect him physically from the onslaught.

Hatty’s strength was phenomenal and by the time that my son made the call, she’d have scissors in my face or knives at my throat – that few minutes waiting for help felt like hours. The police would restrain and disarm Hatty using the minimum possible force, although it would often take three burly officers to take her weapons from her. Hatty would withdraw into herself and it was impossible to communicate with her for several hours afterwards. We would settle her comfortably where she could see us and the police would start trying to arrange for a mental health assessment at the time when it was most needed. Despite their very best efforts, they never achieved this.

From the first time that we called them, Dorset Police were magnificent. They responded swiftly and ensured that we were all safe, but they did so much more; they recognised immediately that Hatty was seriously unwell. They reassured me that I was coping as well as anyone could in such difficult circumstances.

Despite this help from the police, Hatty got worse. Her fears became more bizarre, her self harm escalated and she took several overdoses. She was moved time and again, even though we knew that change was a major trigger. As the moves continued, Hatty began to starve herself. This was pounced on as evidence that she had an eating disorder, but the truth is that Hatty wanted to die. When she was 15, Hatty’s psychologist told me that they realised that Hatty was acutely psychotic, that she needed the correct medication in sufficient doses and that she needed very specialised care. I was over the moon that finally Hatty would start getting the help she needed. The next day the psychiatrist turned up unannounced on my doorstep. He sat at my kitchen table and he told me that Hatty was not psychotic – she was just bad, and, according to him, if she carried on like this she would end up in a Young Offenders’ Institute. It was clear that he forbade any further mention of psychosis in relation to Hatty from any member of his team.

Hatty was moved out of the county

In 2006, Hatty was moved to an Eating Disorders Unit elsewhere. She was tube fed, because they could force her to put on weight, but they seemed unable to understand that that would not solve Hatty’s problems.

The next move was the best ever, for all of us. Hatty was in the Intensive Care Unit and her psychiatrist was wonderful. She was kind and caring, she gave Hatty her diagnosis and she started her on clozapine. In all Hatty’s years of taking it, it has never got rid of the voices completely, but it quietens them. And as they quietened, Hatty was able to start eating and life became a bit more normal. But this psychiatrist left and the locum who replaced her told me on his first day in the job that he was stopping Hatty’s clozapine, because it had never really helped her. She was moved to a local hospital and the voices got louder and more insistent.

Just before her 21st birthday Hatty was moved again, and it felt as though she was almost home. However, despite a clear diagnosis, the staff at the new unit decided that she had a personality disorder and there was no mention of psychosis. As her fears escalated, she starved herself. After five months and with a couple of weeks to live, Hatty was moved back to Intensive Care at her previous unit. The new psychiatrist immediately reinstated her diagnosis of psychosis and clozapine was to be restarted as soon as her weight was high enough. This admission lasted 4 1/2 years. A good part of that time was spent trying to identify suitable care for Hatty back in Dorset. Eventually a planning meeting was held and I heard that one of the psychiatrists had assessed Hatty. His report was read to us and the gist was that Hatty’s condition is so severe and her needs are so specialised that she would be in a psychiatric intensive care unit probably for the rest of her life. As a result of this, a Dorset commissioner thought it would be a good time for Hatty to have a flat so that she had somewhere safe and secure to live.

A new beginning for Hatty 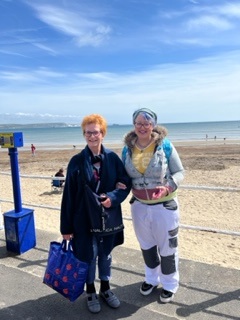 In 2014, after 8 years continuously in hospital, sectioned, Hatty moved into her flat in Dorset. She has an intense package of care and she is very content. Her quality of life is so much better than it was in any other form of care and she is adamant that she never wants to go into another psychiatric unit. We manage her crises ourselves and her self-harm is minimal. The voices still scream at her 24 hours a day and I am amazed at her ability to manage them. We laugh a lot, we put on our wet suits and swim in the sea when I finish work and life is good for us all.

When I was writing this and thinking about what caring has meant to me, I was reminded of an incident at hospital in 2008. Hatty and I were sitting in the Day Room on the window seat with a lovely view of the sea. We were playing cards and chatting and suddenly Hatty’s hands flew around my neck and she squeezed so hard that I lost consciousness. Afterwards she described the voices laughing and clapping and cheering, because they were so pleased with her and Hatty giggled in delight. In that moment her grip lessened and I came to. I had no idea what had happened, but as I saw her hands reaching towards my throat, instinct kicked in and I ran for safety. A few days later I was sent to the staff trainer at the hospital, who taught me ‘breakaway’ techniques. But that felt completely wrong, because when Hatty is at her most distressed, she needs me to stay with her safely. I would never advocate that any carer puts themselves at risk; for us, the rings that Hatty wears on every finger to prevent us reading her thoughts have provided an alternative way. As she reaches for my throat, I instruct her to squeeze my hands tightly. It is very painful, momentarily, but it is not life threatening. And as Hatty’s fears subside a little, I am able to hug her until she feels safe again.

I believe that like a baby born with brittle bones, who suffers fractures with every movement, Hatty was supremely sensitive to all the rough and tumble of daily life. I don’t believe that we could have prevented her from developing psychosis, but I do believe that the treatment that was meted out to her, and to my son and I as her carers, could and should have been very much kinder.