Caring for somebody for long periods of time can be extremely draining, stressful, lonely and can impact on your health and create a loss of identity.

I have been a senior nurse working for the NHS for 37 years. For the last 16 years, I have also been caring for my daughter who has learning difficulties and mental health issues.

Sadly, my daughter lost her mother when she was 10 and her brother was only 8. I remarried 2 years later, now my daughter is 30 and the challenges are becoming harder as we both get older.

I retired early from nursing in 2020 at the age of 56 because the demands of my caring role have finally caught up with me.

My profession as a senior nurse was a huge part of my identity and it has been a privilege to work for the NHS. Work gave me balance and a sense of purpose and increased self-esteem. The difficulty was though, the balance was difficult to maintain with my daughter’s fluctuating needs and demands. As she has got older, the challenges become greater and the balance with work even harder. My daughter became more locked in and consumed by acute anxiety and depression. She constantly expressed anger and frustration with her situation, which she aimed at me. So, life became less about work and more about juggling, managing higher levels of stress, constantly seeking solutions and just accepting my lot. It is hard to balance caring and career when both were part of having a fulfilling life for me.

I was doing a dad’s role and I never considered myself a carer until recently. I also never approached any of my seniors to discuss healthy options to support my balance between work and a caring role. In truth, I had fears of discussing my situation with my managers as I loved doing my job and I didn’t want to show vulnerability or signs of weakness, or to lose it.  I also didn’t know what help or support was out there for carers working in the NHS at the time.

Struggling with caring for someone with mental ill health

In 2018, my daughter had an acute episode of mental health and ended up in hospital. Things had reached crisis point as my daughter struggled with psychosis and her physical health also deteriorated.  Although it was no surprise it still hit me like an express train.  We spent a day in the Emergency Department before she was sent home, still in crisis. This left me and my son staying up in shifts to try and keep my daughter calm. At this point she was extremely ill and was often aggressive, banging, screaming, and hitting those around her.

I was in survival mode, isolated even from my supportive family and working with health professionals struggling to find a plan that would meet my daughter’s needs. I became isolated because I wanted to protect the rest of the family from how hard things had become and the aggressive state my daughter could be in. At this point, my health was now struggling with the intensity of the support my daughter required and I had to dig down deep to keep going.

It was relentless. I felt very alone, the level of care I provided was 24 hours a day, with a crisis team on the periphery attempting to engage with my daughter. I had to go off sick from work, life felt so uncertain and daunting. At this time, I did not consider myself a carer but both carer and Dad roles were now in direct conflict.

Following this crisis, I eventually returned to work, and my daughter seemed happier with life. For the next two years, I was picking up work projects and being supported by senior staff which made a difference. Despite this, eventually I agreed that I should not return to work, even though this was a job I had been doing for a long time and enjoyed. I decided to take early retirement, although I still feel conflicted with that choice. On the one hand, maybe I should be thankful that I have had such a long career or that I can spend more time getting the support my daughter needs but I loved my job.  So, I move into the next stage of life with some uncertainty and trepidation and sadness of the ending of my career.

Miles and his daughter 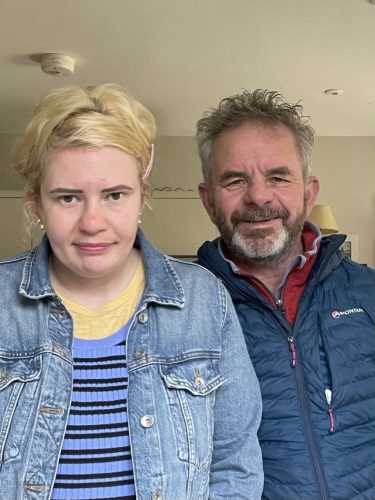 ‘Hindsight is a wonderful thing’

Looking back, I wished that I fully challenged the situation with my daughter when she was at school and that I’d pushed harder to secure a planned future.

My daughter’s local school didn’t cope with her deterioration in mental health and underestimated her learning disability. My daughter started hiding in toilets fearing any human interaction and we soon found out that the school could no longer support my daughter in further education.

With no agreed transitional plans in place, she left the school. Leaving the school meant both me and my daughter had many uncertainties and apprehensions on what life might hold.

Throughout my continued role as a carer, accessing the right level of support for my daughter has always been difficult. Mental health services were often overstretched and under resourced and illusive when we needed it the most.  Even the required speech therapy was unreliable and running on skeleton staff.  Leaving me and my daughter struggling.

Finding support as an unpaid carer

6 months ago, my daughter slipped into a meltdown and the level of care needed increased. At this point, it felt terminal with no way out. I continued to be detached from the family to protect them from my daughters behaviours, it felt easier this way and I was also fighting for my daughter under a mental health team with limited expertise in learning disabilities.

Despite that, there was a change. The mental health team have been keen to help and work together to better understand my daughters’ complex needs and my daughter finally has detailed psychologist assessments that she responds well to.

So overall, the mental health team’s response was extremely supportive. So, things moved quicker, plans are developed, and people were finally listening as we struggled to cope. I also got support from the psychology department as part of a family intervention service. This was invaluable in steering us through this crisis and getting us both to explore and open up to new ways forward with an emphasis on improved networking.  We also met a social worker who is providing additional support for my daughter.

The psychologists also recognised how impacted I was by my daughter’s needs and suddenly there was lots of signposting, and I now have access to Rethink Mental Illness, Carer support groups, Connections (111) which I can even use in the middle of the night and a duty manager (with the Community Mental Health Team) during the day.  It is still intense, but we find ourselves cocooned by a level of support that we have not received before. We move from not coping to coping, enabling us to travel forward slowly but surely onto a road of recovery.

To sum up, it’s a journey hit by crises. It’s frustrating that on every step I have been fighting for support to better understand my daughter’s needs.  Although, my daughter is now doing better it feels like I have not got the full support required to be proactive in preparing and helping for future crises. It’s cyclic, and I want to know I have done everything I could but now she’s doing better, it feels there is less urgency to deliver plans aimed at supporting her learning disability, her mental health and her potential autism diagnosis.  So, it’s harder now to get the support that I believe will help to improve my daughter’s quality of life and a future that avoids and steers away from ‘crisis’. Although, may take a while, I am confident that in time my daughter will finally get all the right care that meets her individual needs.

Bit by bit there is more support for unpaid carers. When I attended the first Dorset Carers Festival in Dorchester in November 2021, I was encouraged that there are now more services in place to support me and my daughter and carers like me but there are ever increasing numbers of carers that need so much more support. Having said that, the services that would have made all the difference in my journey, especially when my daughter was still at school.

If like Miles, you could do with information, advice, or guidance about balancing caring and working or your caring role in general, please contact us on 0800 368 8349 or email admin@carersupportdorset.