Celina was only twelve years old when her Dad sadly passed away. At such a young age, Celina suddenly had to deal with the loss of her Dad and, as the oldest of her five siblings, take on the role of second parent. She also became the main carer for her Mum, who has cerebral palsy, fibromyalgia and also suffers with symptoms of agoraphobia, which means she finds it difficult to leave the house.

‘I started doing everything – cooking, cleaning, helping my mum get washed and dressed, and when she found it hard to leave the house I’d take on doing the shopping and other stuff.’

Celina was thrown into caring, but no one really understood her caring role and how hard it was to juggle everything at once. Celina’s Mum remarried an Army Medic and although this was great for their family, it still meant that Celina was her Mum’s main carer when her step-dad was stationed.

‘No one really knew what it meant to be a young carer, everyone just thought I was helping out, but it was more than that.’

Now eighteen years old and a young adult carer, Celina knows the importance of raising awareness for young carers and their mental health so they can get the support they need.

“I always have a problem with anxiety when I go out because I’m always so worried about mum. At one point I didn’t really go out at all. We moved around a lot to find better housing for my Mum’s needs, so I think I sort of slipped through the net.’

And like many young carers, Celina’s mental health suffered and she became incredibly stressed.

‘Everything was sort of manic and my friends even began to get annoyed with me when I would have to cancel plans last minute. They didn’t understand why I had to look after my Mum.’

Although Celina is still caring, she is able to attend college and pursue her dreams of becoming a veterinary nurse. She loves to be around animals and her array of pets at home means she gets lots of experience for the future. 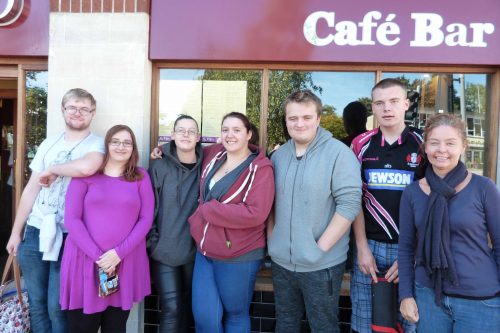 “Coming to the Young Adult Carer Café makes me feel normal. Everyone is in the same sort of situation and everyone just gets what might be going on in your life.’